Demon Turf and the Art of Self-Expression Through Movement

This realization is what made the genre so special to me. Special enough that I needed to tackle it with my spectacular team, to experience it first-hand and see how we can deeply explore that core idea. Every genre has its form of expression, that oftentimes comes with a certain level of complexity, but simply moving through the world? That’s as fundamental as it gets, and precisely why it’s so exciting to me. It’s beautifully simple and approachable but hides an insane amount of depth! So how is it accomplished exactly? It’s all about the details of giving the player an abundance of choice in how they progress without requiring any specific solution.

Let’s say the player needs to climb a tower of sorts. Right off the bat, does the player run towards it? Or take a casual stroll around it first? Do they start doing a triple jump, followed by a double jump to reach the first ledge? Or do they instead perform a triangle jump, followed by a wall jump to skip to the next platform up entirely? Do they carefully spin jump past some moving platforms or super jump past all of it to get past it quicker? The point is, the player analyses how they want to move past a space and then acts upon it with their own style! Giving the player options, both satisfying and simple to pull off, is key. Add an extra layer of depth by combining moves in clever ways and you get even closer to that sense of self-expression through movement.

With Demon Turf we released a demo a while back, which included weekly challenges, and through it we developed a thriving speedrunning community. It’s no exaggeration to say that the playstyles between our best runners were so diverse, that I could differentiate them and tell you which recordings are by which runner simply by observing their movement style. And that’s something very special to me and our team. To make the movement so effortless, and have its abundance of choices connect with each other so seamlessly, that people develop their own styles while feeling badass all the time. Beginners or experts alike!

With that in mind we also tried to add a healthy amount of accessibility options so that hopefully nobody feels left out, even when levels become particularly challenging. This involved implementing button mapping, color blind modes and a plethora of gameplay options. It also meant we had to come up with a solution if you’re simply stuck and can’t beat a level despite your best efforts! That’s where the “revolutionists” come into play! For a small fee of collectable sweets, you can ask them to beat the level for you! Don’t worry though, you can reclaim your sweets anytime by trying the level again later! We also added gameplay mods you can buy to modify your movements, as well as dyes & pets to customize your look. Not only does Beebz, the protagonist, express your movements but she’ll also rock your styles as well!

We really poured our hearts and souls into this game. It’s loaded with content and challenges, has a world filled to the brim with oddball characters and, at its core, tries to be the most fun 3D platforming experience you can have. Demon Turf launches today and I can’t wait to see how everyone expresses themselves across the turfs to take on the Demon King! Good luck out there and most importantly: Have fun! 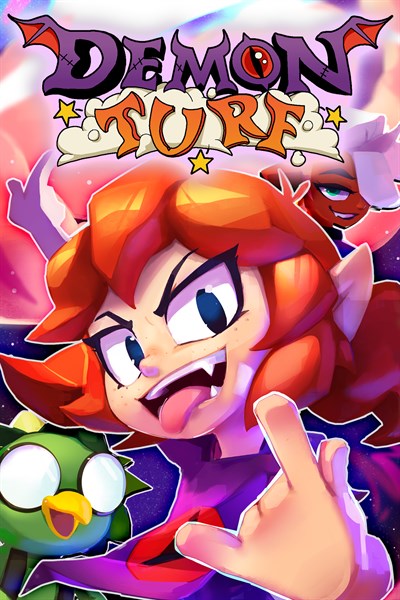 The Demon World is inhabited by all kinds of nasties… Most of them lumped into gangs battling for dominion, each led by its own head honcho. Yet even these bad dudes are no match for the Demon King himself! Instead, the task falls to Beebz, a young demon barely a thousand years old, who decides it’s time for her to kick every turf leader’s butt and become the Demon Queen herself.

• A unique aesthetic combining the expressiveness of 2D illustrations with the depth and sense of exploration 3D environments can offer!
• A world chock-full of humor and style, from the music accompanied by the protagonist’s rapping to the colorful characters inhabiting the world!
• A unique take on progression! Take a victory lap and explore previously beaten levels to discover their liberated state, with plenty of mechanical and environmental changes to uncover. Or take some time off in the hub town taking on sidequests and other distinct challenges instead.
• Pull off some clever platforming combinations or get physical with a special physics-driven combat system that ramps up the chaos and fun. Push, pull and spin your enemies out of your way.
• A different take on checkpoints, freeing the player to place them wherever they want. Show off without them for a perfect run, or place one in preparation for a challenging section.
• Unique challenges like the “Photo Hunt” mode where you’re tasked to take pictures of hidden locations & surprising moments! Or simply take pictures and selfies for fun and share them across all social media!
• An awesome collection of purchasable mods that can be combined in clever ways to completely change your playstyle! Or you could buy some dyes & pets instead, the world’s your oyster!
• Tons of carefully crafted levels that constantly introduce new challenges as well as engaging bosses full of character and life! Until Beebz gets to them…

From the makers of Slime-san comes their newest creation! The team used everything they learned from their 2D platformer to elevate this 3D platformer to the next level!