Celebrating a decade in fashion, the Hyderabad-based designer reveals what it took to break into the New Delhi market, and plans to foray into the menswear segment

For a name synonymous with bridal couture, what better way to mark a decade in fashion than an event featuring her signature ensembles. Designer Jayanti Reddy — whose handcrafted lehengas have been sported by the likes of Shilpa Shetty, Sonam Kapoor, and Aditi Rao Hydari — has collaborated with wedding planner Devika Narain for a month-long event. At the Jayanti Reddy store at Ambawatta One, Mehrauli, New Delhi, visitors can check out her creations and six installations that highlight the work by weavers and craftspeople.

The display is in tune with the theme ‘Explorations in Identity. Pehchaan. Gurtimpu.’ (identity in Hindi is pehchaan and in Telugu, gurtimpu). With her roots in Hyderabad, Reddy’s couture creations often incorporate the craftsmanship of the Deccan region with that of Banaras. 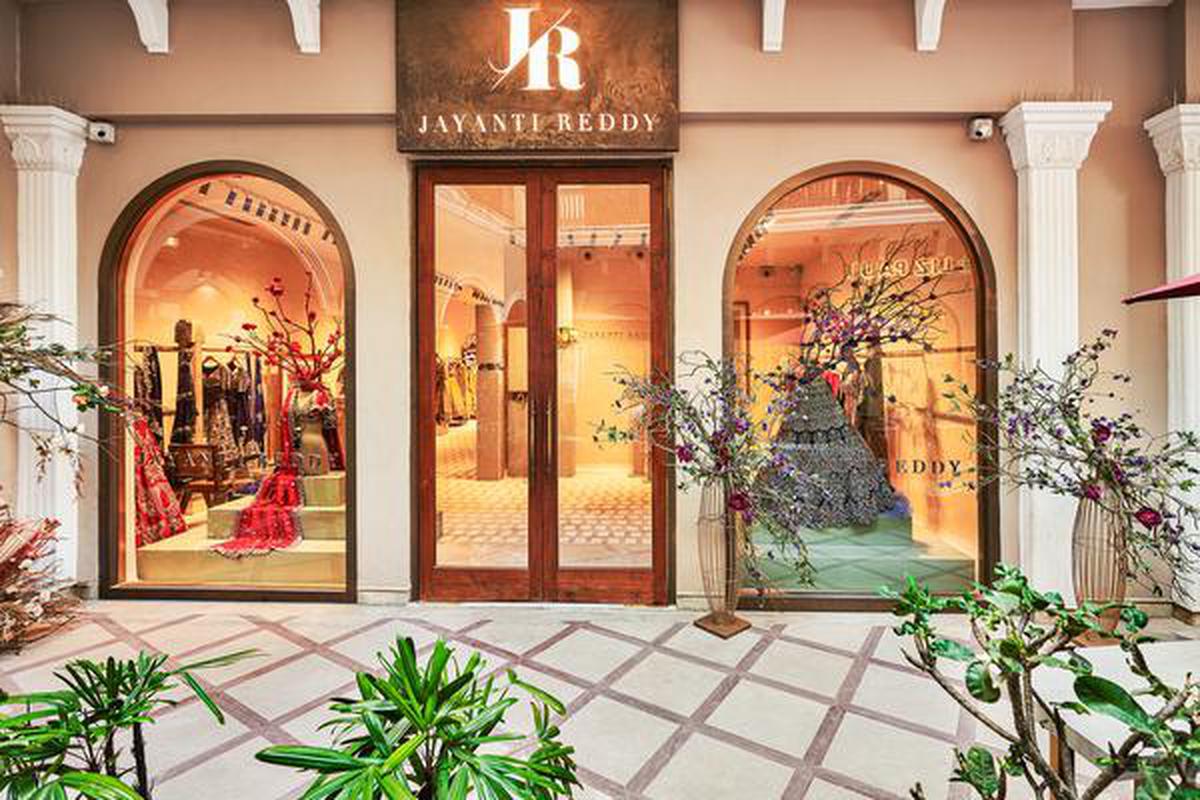 Reddy, 34, who had planned to open with a spring-summer line in February-March 2020, launched her New Delhi store in October last year. “The onset of the pandemic forced a change in plans,” she says. Given the travel restrictions, she communicated with the staff through video calls to make the final plans. Her sister-in-law, architect and interior designer Mouna Reddy, liaised with contractors in Delhi to complete the store.

Once lockdown eased, the capital witnessed intimate weddings. “It was a good call to open the store in October. Our bridal couture found takers,” says Reddy. 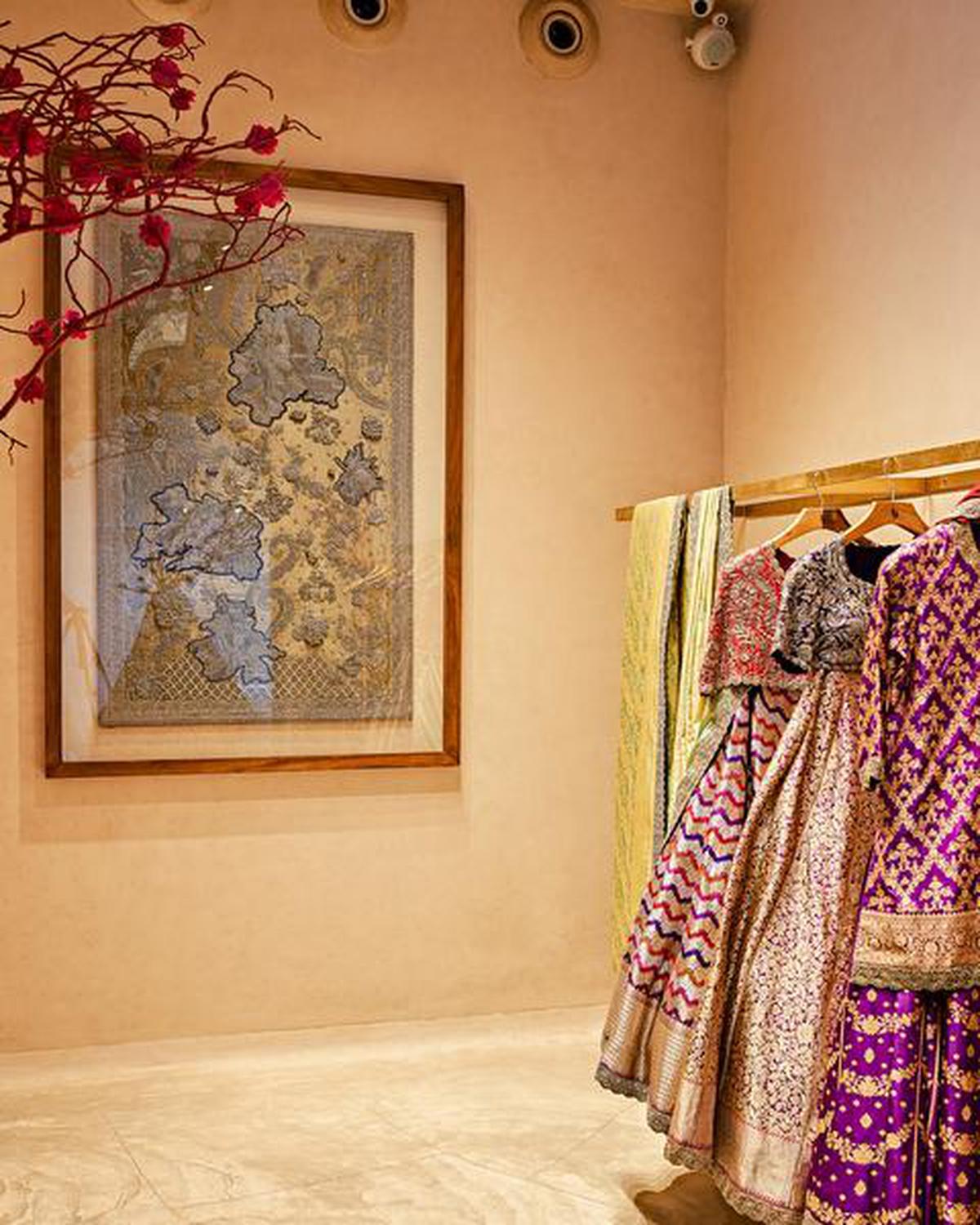 Making her way to Delhi

It isn’t often that a designer from Hyderabad opens a standalone store in Delhi. “Contrary to assumptions that Delhi is all about bling, I found a number of people appreciating the understated zardozi and embellishments that has been my style,” she says, adding that the inroads into the city’s market happened organically, thanks to her showcasing at Lakme Fashion Week over the years. Reddy didn’t have to socialise to network with the well-heeled. But she did pay close attention to the response she was getting at multi-designer stores where she was stocking — Ogaan, Ensemble and Aza Fashions among others — to gauge buying patterns.

In Mumbai, apart from stocking at multi-designer stores, Jayanti Reddy has a dedicated bridal room at Ensemble. Opening an independent store meant having to refresh the stock at least once in two months, if not every every two to three weeks. With weavers and craftspeople returning to their hometowns and the interior regions of the country also experiencing a surge in Covid-19 cases during the second wave, it wasn’t easy.

Eyes on the brides

The bridal segment, she says, continued to hold well. With the number of guests being restricted, what saw a dip was the sales for guests attending weddings. “But in the last three to four months, things are back to normal,” she says.

The pandemic also witnessed Instagram stores rising in popularity, selling ensembles for a lower prices, with the advantage of not having to pay rents and overhead costs. This, says Reddy, has not affected her label since the primary focus has been on bridal couture. “Brides still want to step into a store, consult and try out something before making a luxury purchase. When I launch a pret line, I will have to look at this competition.” At the moment, label Jayanti Reddy stocks ready-to-wear separates for festive occasions. Think peplum skirts, drape skirts, tailored trousers and short kurtas. Her bridal couture is also driven by the idea of mixing and matching separates, rather than coordinated sets.

“Two brides who choose similar lehengas will look different because they can team it with different blouses and dupattas,” says Reddy, who has been partnering with digital influencers occasionally. She looks at it as an opportunity to showcase her designs on real women: “Models carry off any outfit beautifully. Sometimes, clients wonder if it will look good on them. There is a better connect when young influencers wear these outfits.” As she celebrates a decade in fashion, Reddy reveals that she plans to venture into the menswear segment shortly. However, she clams up when probed further: “It is still early to talk. I can only say there will be surprises.”

U.S. mandates vaccines or tests for big companies by January 4

Kal Penn comes out, announces engagement to partner of 11 years

Kal Penn comes out, announces engagement to partner of 11 years