Puneeth Rajkumar, Kannada film actor who died on Friday sending shock waves across the State, was on screen most of his life as he made his debut when he was six months old. He had an emotional connect with the audience that was rare in a star-driven industry.

Watch| Puneeth Rajkumar: Pics from the life of ‘Power Star’ of Kannada cinema

Read | For Puneeth Rajkumar, this was no time to die

Here are the latest updates: 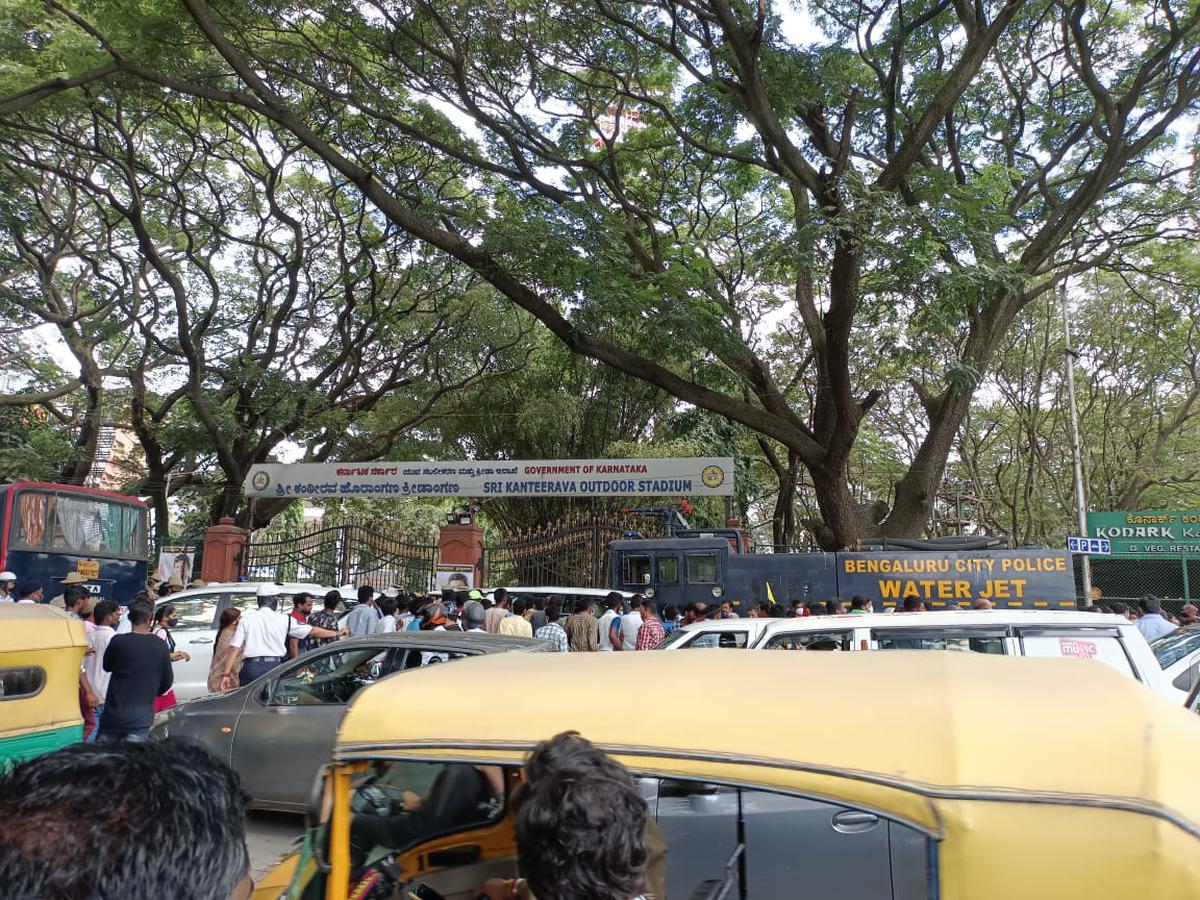 Controlling crowd outside the stadium was very challenging for police. Due to heavy people thronging hardly any vehicles moved on Vittal Mallya Road. Police had to divert the vehicles via Kasturba Road.

Those unable to get inside were seen climbing barricades.

In the afternoon, traffic police blocked the traffic near Cubbon Park gate to control the traffic.

Police vehicles and those of cine stars caught in the traffic. Thousands of fans are thronging Kanteerava stadium in Bengaluru where mortal remains of Kannada star Puneet Rajkumar have been kept for fans to pay their last respects.

A large number of Puneeth Rajkumar fans have come from various districts of North Karnataka to pay their last respects. Bhimaraju , an ardent fan of the star said “Around hundred fans of Puneeth Rajkumar have come from Haveri. We reached the Kanteerava Stadium at around 8 a.m , but some of us couldn’t get inside because of heavy crowd. Someone tore my shirt in the crowd. I lost my footwear. It was impossible to get inside, then I decided to come back”.

People from far off places such as Bellari, Bagalkot, Yadgiri has come to pay their respects.

People from neighbouring districts of Bengaluru also arrived in hundreds. Many carried portable sound systems and seen playing hit songs of Puneeth Rajkumar films. Some of the fans also seen arriving in a tractor.

Lakshmi, a fan, said , “Puneeth Rajkumar is loved by everyone that’s why thousands of people have turned up . After waiting for over two hours managed to get inside.”

Puneeth Rajkumar’s heart beat and blood pressure (BP) were normal when he went to his personal physician B. Ramana Rao around 11.20 a.m. on October 29.

Dr. Rao, who referred Puneeth to Vikram Hospital after noticing a ‘strain’ in his ECG, said the actor complained of ‘weakness’ when he came to consult him.

He recalled that his father Dr. Rajkumar too went like this.

Senior producer Rockline Venkatesh appealed to all fans to maintain peace and pay their last respects at Kantheerava Stadium today all day.

“Tomorrow morning we will take the mortal remains to Kantheerava Studio in a procession. Public will not be allowed at the Studio. It is a very small place. Only family members and friends from the film fraternity will be allowed there. We have arranged a few LED screens outside where any members of the public who turn up can watch, but they will not be allowed inside. I appeal to fans not to come to the Studio and provide the family some privacy,” he said.

CM announces that funeral will be on Sunday

Karnataka Chief Minister Basavaraj Bommai announces that funeral of Puneeth Rajkumar will be on Sunday.

Earlier in the day, multiple ministers had said the last rites will be held Saturday evening itself, after the actor’s daughter studying abroad reaches the city.

However, with thousands of fans still thronging Kantheerava Stadium to pay their last respects, the government has decided to hold the last rites on Sunday.

Announcing the decision chief minister Basavaraj Bommai said the decision has been taken in view of providing opportunity to all his fans to pay their last respects. “I appeal to everyone to maintain calm and peace,” he said. He also said conducting the last rites at Kantheerava Studio after dark was also a challenge.

Preparations made for funeral: Revenue Minister

Revenue Minister R. Ashok has announced that preparations have been made for the last rites of Puneeth Rajkumar. The body is likely to leave Kanteerava Stadium for Kanteerava Studio by 2.30 p.m. Schools in sensitive areas have been closed on Saturday. However, majority of the government and aided schools are functioning as usual. Colleges and universities have postponed the examination as they feared that students may find it difficult to commute.

He called me mama: Siddaramaiah

“He caller me mama. I had met him and his brother Shuvarajkumar about 20 days ago… Puneeth, like his father, was a simple and humble man. He inherited his talent as well and was a star as a child and a hero. His death is a loss not just to Kannada film industry, but also to the indian film industry,” he said. Shops on this street in Chamarajnagar downed their shutters on Saturday during the self- imposed bandh observed by traders as a mark of respect to Puneeth Rajkumar, who passed away on Friday in Bengaluru. Photo: Special Arrangement.

Traders and commercial establishments in Chamarajnagar are observing a self-imposed bundh on Saturday as a mark of respect to film star Puneeth Rajkumar, who passed away in Bengaluru on Friday.

Son of legendary actor Rajkumar, whose hometown Gajanur is close to the town, Puneeth Rajkumar used to visit the village taking time out from his busy shooting schedule as he had great affection towards the village and its people. He used to spend time at places considered to be his father’s favorite, like the banyan tree and ancestral home.

Puneeth Rajkumar was also the Brand Ambassador for Chamarajanagar district.

As crowds continue to gather at Kanteerava Stadium, traffic movement in and around the area has been diverted. Managing the crowds is the priority here, said a police officer. Trucks headed to Kanteerava Stadium carrying seats, pandal material and items were stuck in traffic on Mysuru Road. To prevent further delays, a police escorted them to the city centre

Over 6000 police personnel have been deployed in and around Kanteerava Stadium where thousands of people have gathered to pay their last respects. Security has also been stepped up across the city. Jurisdictional police have been instructed to increase patrolling in sensitive areas.

Over 50 platoons of reserve police force including KSRP, CAR and RAF have been deployed.

Each division of the city has been assigned to a senior officer of the rank of DCP to monitor law and order. Since yesterday over 500 persons have been detained as a preventive measure.

Nandamuri Balakrishna, Telugu actor, politician and son of the late NTR, visited Kanteerava stadium to pay his last respects. Rajkumar and NTR families shared a close bond. Among the other southern film personalities who visited was Prabhudeva.

“He was not just a brilliant artiste, but a great human being. He was a friend and brother,” said Mr. Balakrishna.

Mr. Prabhudeva said, “I knew him from the time he was a child. My entire family is shocked.”

Memories of a song

“He was a lovely human being. I cannot forget the way his smile lit up his face always,” she said.

Actor Ramesh Arvind, speaking about his long association with the 46-year-old actor, said he was a man who mingled with anyone and could strike a connection instantly. “Off screen too, he was one of the warmest people I knew,” he said.

On the way he reinvented himself, Ramesh said, “He understood the importance of creating digital content and OTT platforms. He could have done so much more.”

Home Minister Araga Jnanendra has appealed for peace, urging fans of Puneeth Rajkumar to bid him a dignified farewell. He is expected to inspect the site of the funeral in the afternoon.

fan of Punit Rajkumar, Kannada film star who died in Bengaluru on Friday.

Rahul had put up a poster of Punit in front of his house, garlanded it and decorated it with a flower rangoli on Friday. He was feeling dejected and must have decided to end his life in his house, a police officer said. A case has been registered.

Those in distress can call the 24 hour helpline 104.

Parashuram Hanumant Dyamannanavar (33) died of shock in his house in Sindholi village near Belagavi. He was watching the news of the actor’s death on a TV channel. He collapsed in his chair and fell to the ground. He was dead before he could be shifted to the hospital. He was a fan of the actor, a city police officer said.

Thousands of fans are thronging Kanteerava stadium in Bengaluru where mortal remains of Kannada star Puneet Rajkumar have been kept for fans to pay their last respects.

People came from not only from various localities in Bengaluru, but also other parts of the State to pay their respects. Some of his admirers at the venue said they had travelled on Friday night to reach Bengaluru on Saturday to pay their last respects.

Among the prominent people seen on Saturday morning were Legislative Assembly Speaker Vishweshwara Hegde Kageri, seer of Suttur mutt, seer of Siddaganga mutt, actor Chetan, among others. Though crowds were big, the arrangements ensured order at the venue. 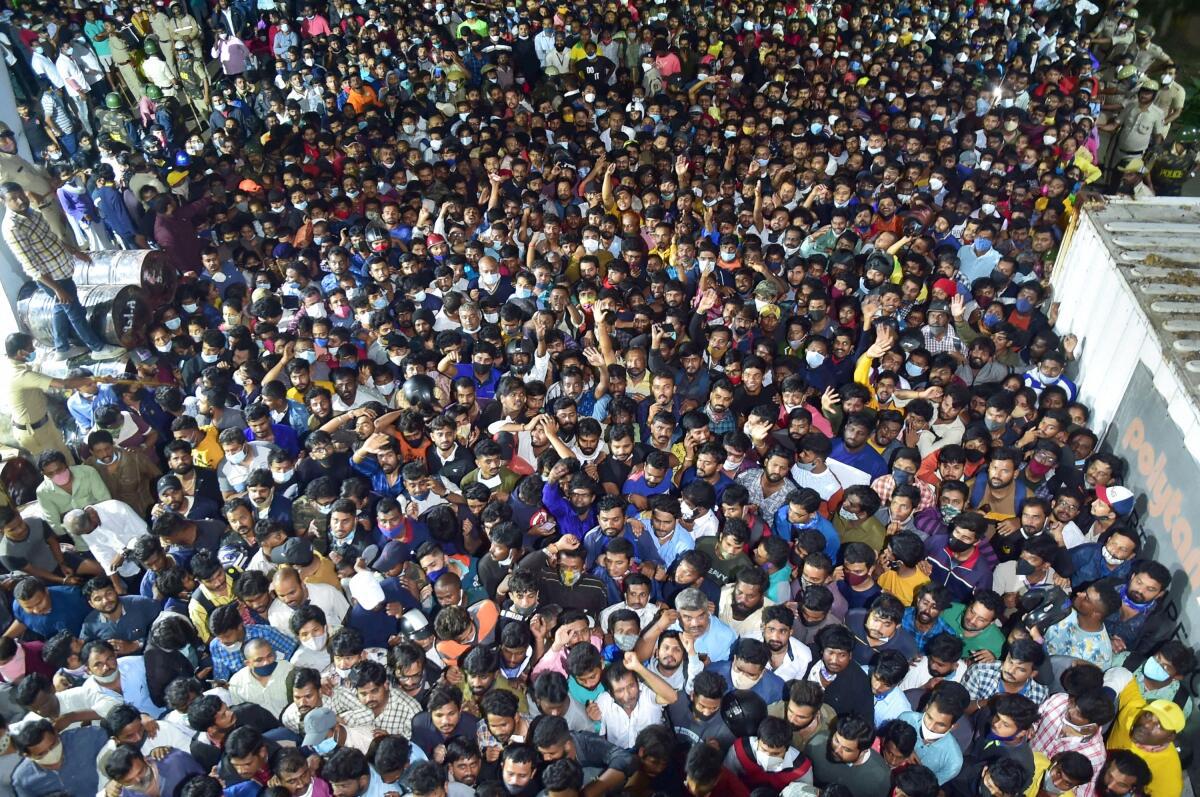 Fans gather to pay their last respects to the mortal remains of Kannada film actor Puneeth Rajkumar at the Kanteerava Stadium, in Bengaluru.

Actor Puneeth Rajkumar was the brand ambassador and campaigned for various Government initiatives. He was roped in several years ago by the Department of Public Instruction for the Sarva Shiksha Abhiyan and he in his advertisements appealed to parents to send their children to school.

Following in the footsteps of his father, Dr. Rajkumar, the family of Puneeth Rajkumar donated his eyes on Friday.

K. Bhujang Shetty, chairman and managing director of Narayana Nethralaya, who personally monitored the eye retrieval process, told The Hindu that Dr. Rajkumar had pledged the eyes of his entire family during the inaugural function of the eye bank (which was named after him) in 1994.

Puneeth Rajkumar (46) one of the marquee names of Kannada film industry and the youngest of the five children of matinee idol Dr. Rajkumar passed away on October 29 after suffering cardiac arrest in the morning. Revenue Minister R. Ashok announced the demise of the actor at Vikram Hospital, Bengaluru. Puneeth Rajkumar is survived by his wife Ashwini Revanth and two daughters Drithi and Vanditha.

Dr. Ranganath Naik of Vikram Hospital said, “Puneeth Rajkumar complained of chest pain in the morning and was rushed to the private clinic of his family physician where an ECG test was done. It showed a heart attack and he was immediately rushed to Vikram Hospital. When he was brought to the hospital, there was no cardiac activity. We put him on a ventilator and tried to revive him, but all efforts failed.”