For the ‘An Eclectic Embrace’ exhibition at Gallery 78 in Madhapur, several artists find their protagonists in Nature

Gallery 78, a contemporary art space in Hyderabad’s Izzat Nagar in Kothaguda has reopened with a group show for the first time after an 18 month gap caused by the pandemic.

The show, ‘An Eclectic Embrace’ at the gallery (on till October 31) showcases artworks of Atul Mahajan, Anirban Mishra, Goutam Pal, J. Joseph Dhayalan, Monty Senarath Colombage, Sanjeewa Liyanage, Subrata Ghosh, Tanmay Santra, Tapasi Nath, and Vijayaraghavan S. The 56 artworks with varied themes and styles, by 10 artists are socially engaging and a response to the times that we live in. 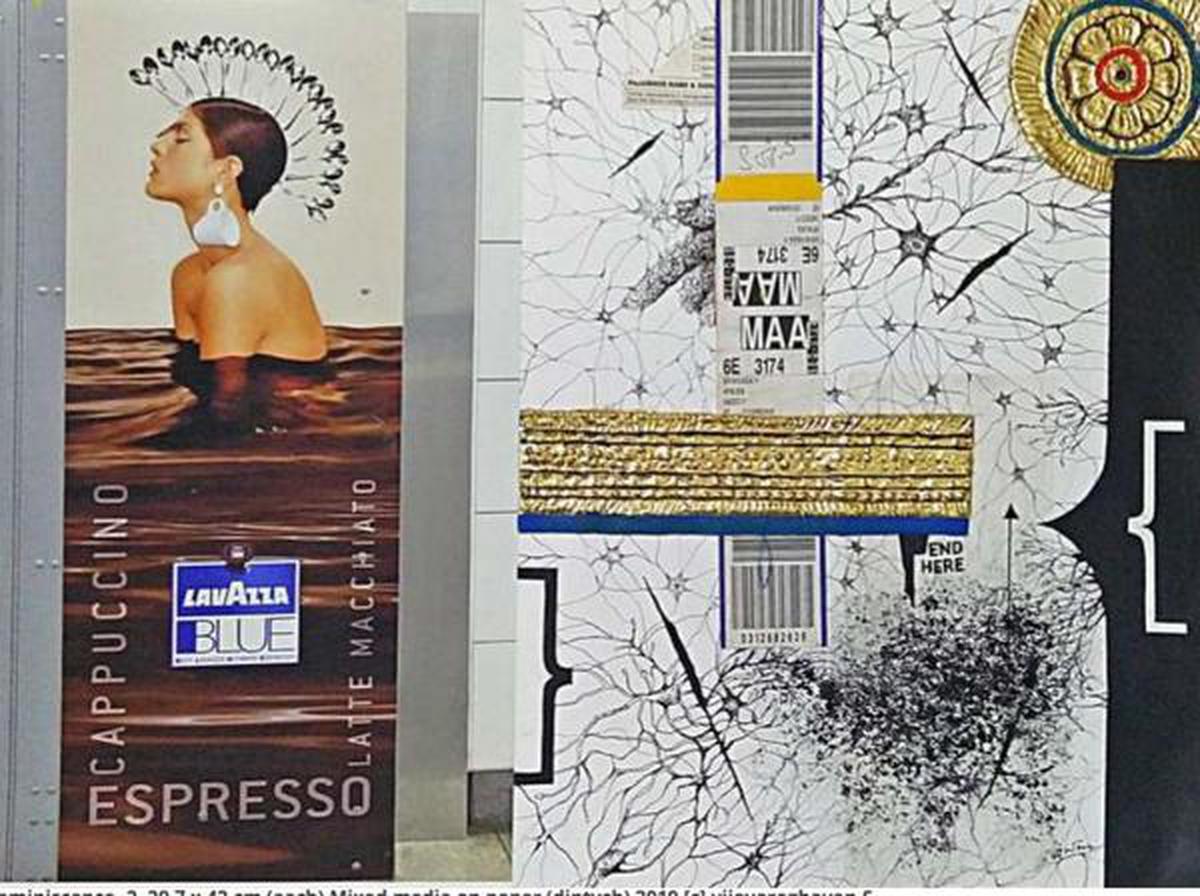 Artist Vijayaraghavan says the show was conceptualised in 2019 with a proposal to display works of only 24 artists. “Then COVID-19 happened,” he recalls.

With Nature as the main theme, the works are a response to the pandemic. The show is ‘culturally deserving and vibrant’ says Vijayraghavan.

He adds, “Tolerance, identity politics and displacement have been some of the issues faced by everyone during the pandemic. Observe and you realise that we as a society are moving away from Nature.”

Born and brought up in Madurai, Vijayraghavan’s Traversing Reminiscences series in mixed media on paper incorporates different elements including a BR code on a gold border design signifying cultural elements. “We see many technological advancements but one has to stay connected to the tradition; Be rooted,” he affirms.

Mundane objects turn into art in another image of a scene on a metro station outside India with upwards facing arrow marks and a bar code. 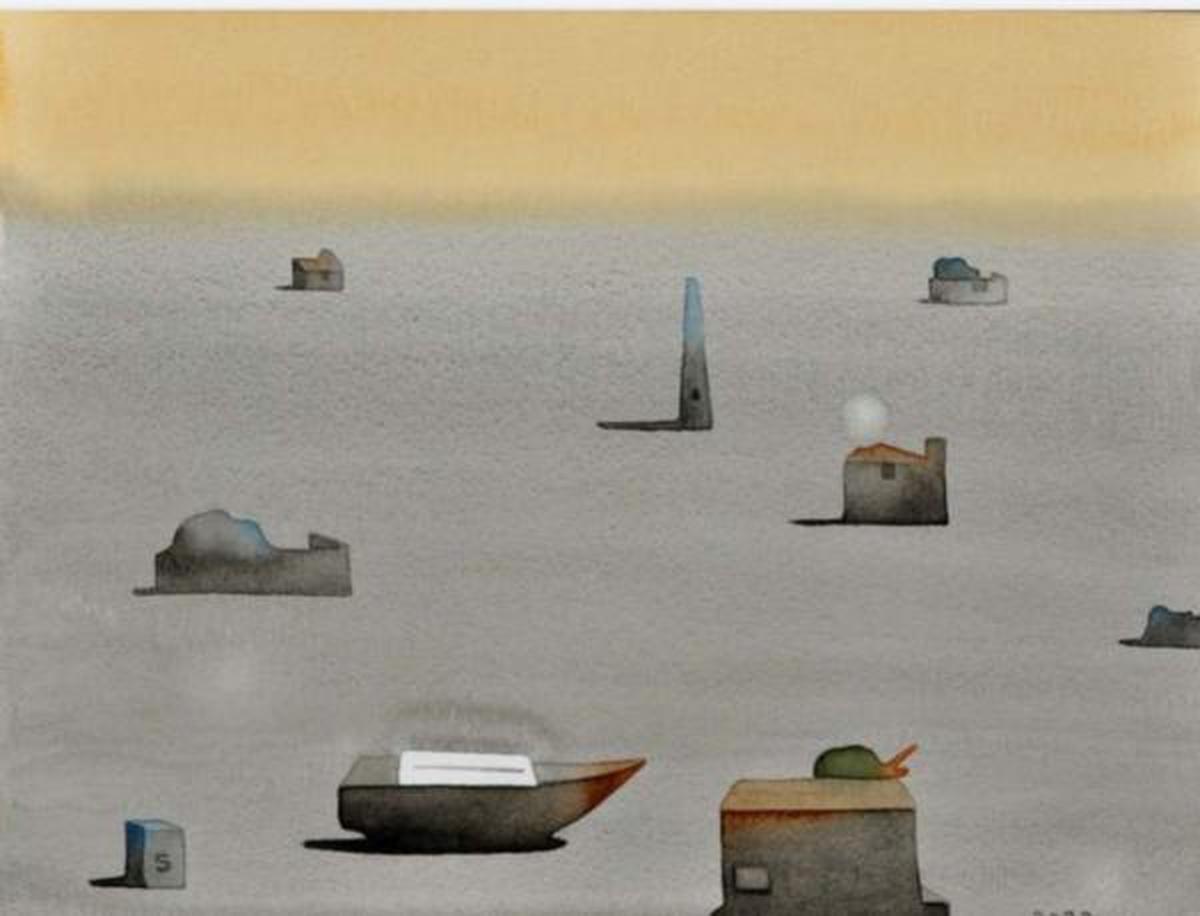 Tanmay Santra’s Homeland series in watercolours depicts the transformation of landscapes on the suburbs. The painting has rock-like objects and houses far from one another on a barren land highlighting the human habitat. “They are my observations, dreams and a metaphor for home; during the pandemic, we were isolated,” says Tanmay, who began working on the works in 2020. A native of Kolkata, Tanmay is a teacher at the Sarojini Naidu School of Arts & Communication, University of Hyderabad. Art is a form of introspection for the artist who enjoys solitude and music. Changing cityscapes inspire Goutam Pal who has been practising art in Hyderabad for a decade. His works depict birds in flight over broken rocks. Painted in a horizontal format, the birds look like they have been hanged. Goutam says, “I have observed that lakes and water bodies in the city are slowly turning into dumpyards for broken rocks.” While the pollution of lakes could represent any city in India, the artist says, “The rocks belong to the Deccan landscape of Hyderabad.” 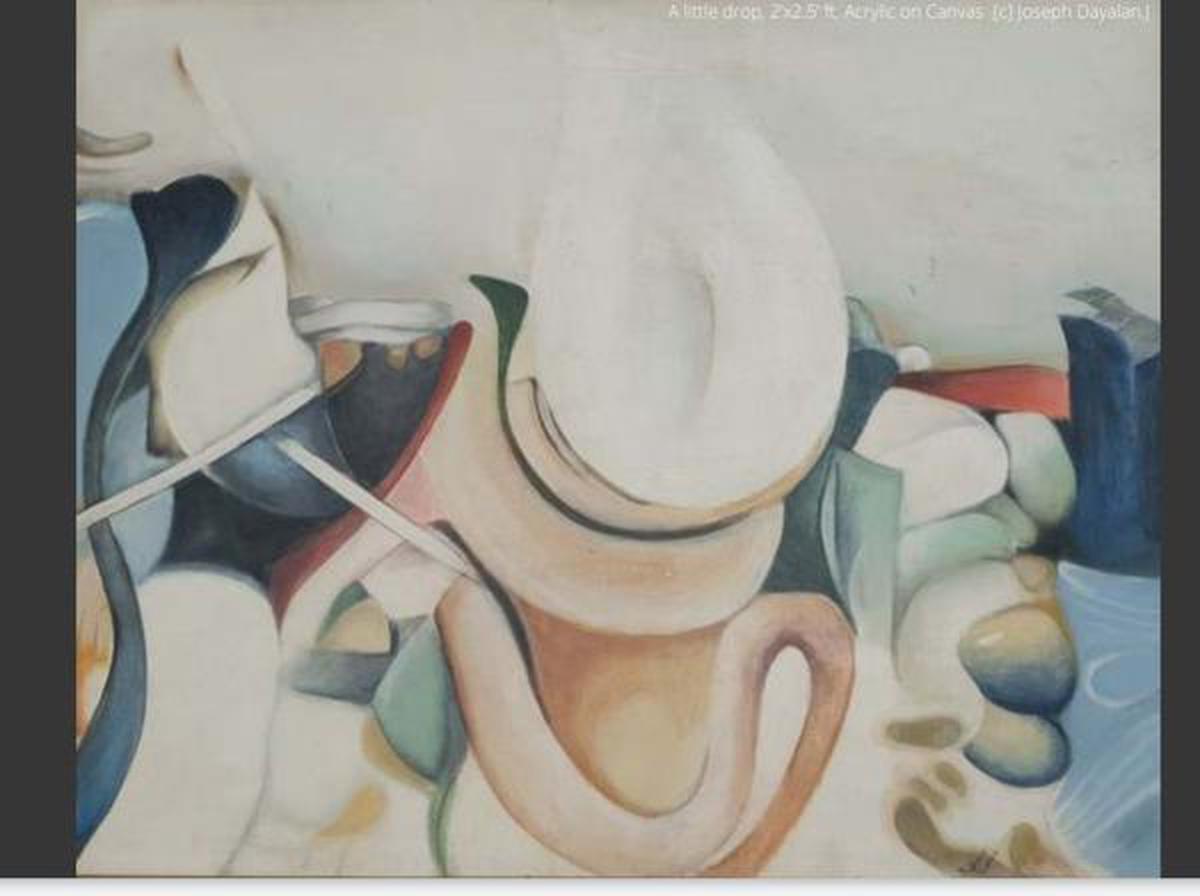 Chennai-based J. Joseph Dhayalan’s five abstract works in acrylic are influenced by music and Nature. “I am inspired by any material, even by a piece of paper. I convey my experiences of what I see, hear or touch, on canvas,” says Joseph who has a keen interest in abstract art. “I do not want to limit the experience of viewers by creating representative or figurative art,” he says.

The artist also says that he hopes to create installations and performance art. He quotes his favourite artist Arshile Gorky, “When something is finished, that means it’s dead, doesn’t it ? I believe in everlastingness. I never finish a painting — I just stop working on it for a while.”

The element of air

Hailing from Ajanta village of Aurangabad in Maharashtra, Atul Mahajan’s focus has been on the element of air in Nature.

He works in Baroda and does installations, performance art and interactive installation (people are also part of it) and also draws on acid-free paper made with alkaline paper technology that helps it sustain longer.

“Nature gives oxygen and protects us but human beings only destroy Nature,” he says. His Positive Negative series was conceptualised when the pandemic began in 2020. “Being positive acquired a new connotation after COVID-19 when people died due to lack of Oxygen. Nature generates oxygen but we deplete its resources,” says Atul. 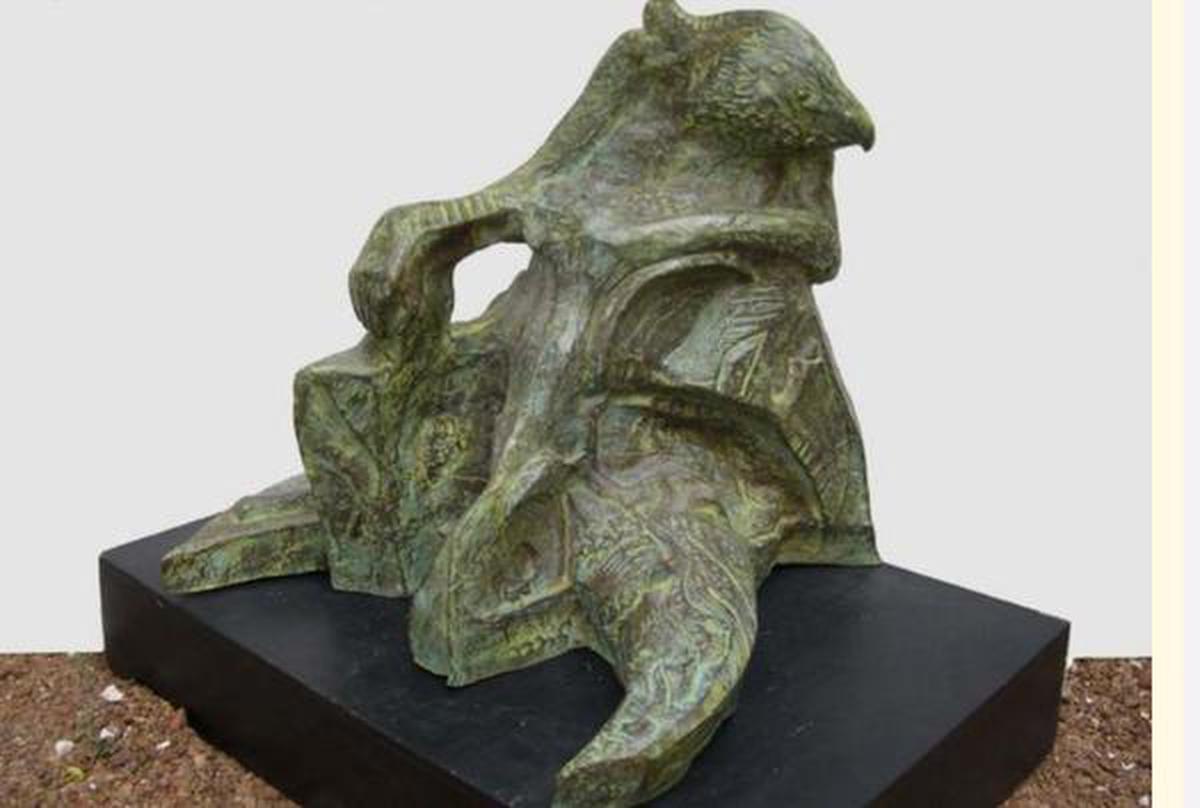 Artist Tapsi Nath has fond memories of the natural surroundings of Santiniketan. Now in Hyderabad, the artist finds solace in her garden and recreates Nature’s moods, its flora and fauna in fibreglass sculptures.

Unknown Stranger in fibreglass is a reflection of her experience of watching her shadow on a wall blending with the shadow of a leaf to create a new form. The King Bird pays tribute to an eagle she watched during lockdown. She says, “The eagle sat like a ruler in the garden.”

With different styles and mediums, artists have come together to explore social issues even as they express concern for Nature.