While Tiger Shroff is in London shooting for his film Ganapath, his rumoured girlfriend Disha Patani celebrated Diwali with his mother Ayesha Shroff.

While the rest of the Bollywood actors are busy celebrating Diwali with their loved ones, some are busy with their work commitments. One such actor is Tiger Shroff, who is away from his family to shoot for his film Ganapath. However, his rumoured girlfriend Disha Patani ensured that his family doesn’t feel his absence. The actress took to her Instagram Story section to share a glimpse of her Diwali celebrations that featured Tiger Shroff’s mother Ayesha Shroff. Also Read: Disha Patani Urges Fans to Be Kind to Animals on Diwali, Shares Message With a Video

His mother, too, shared the picture and a video on her Instagram handle and wrote that ‘missing a part of the little gang’.

The picture also featured their close friend Ana Singh. Tiger Shroff is currently in London to shoot for Ganapath with Kriti Sanon. This film will reunite Kriti and Tiger after 7 years, since their first film Heropanti. The actor, too, gave a glimpse of his Diwali celebrations on Instagram. 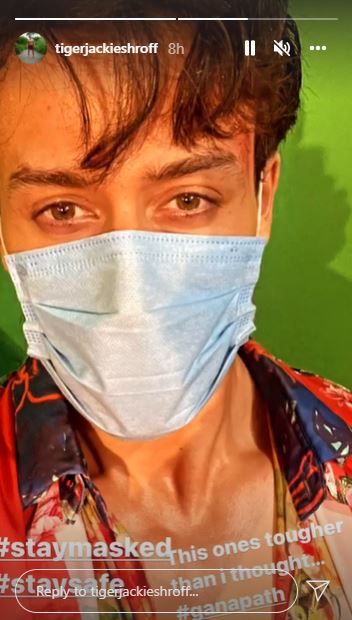 Disha Patani and Tiger Shroff’s dating rumours are doing the rounds for some time now. They keep dropping adorable comments on each other’s social media posts and the Radhe actress is often spotted with Tiger’s sister Krishna and mother Ayesha. Last month, they were clicked by the paparazzi when they had stepped out for a special screening of Hollywood biggie Venom: Let There Be Carnage. Tiger, Disha and his sister Krishna Shroff made their way back from the screening venue in the same car. However, none of them has confirmed their relationship.

On the work front, Disha Patani was last seen in Salman Khan’s Eid release, Radhe: Your Most Wanted Bhai. She will next be seen in Mohit Suri’s Ek Villain 2.