Lata Mangeshkar — The name says it all

How to describe someone like Lata Mangeshkar? A singer who has had a career spanning eight decades and has sung innumerable songs in 36 languages. It’s a voice that has documented the Indian imagination and has remained the perfection reference for several generations of composers and listeners. Javed Akhtar and Gulzar come to rescue. “When you are talking about Michael Angelo, Beethoven or Shakespeare, the name says it all. Lata Mangeshkar’s greatness is her name itself. There is no other word that can encapsulate her,” Javed Akhtar had once said. Gulzar’s lines in the song ‘Naam gum jayega’ — ‘meri awaaz hi pehchaan hain’ — sums it up beautifully.

Stories about this legendary artiste, who turned 92 last month, abound. Lata began her career as a 13-year-old, and remained unstoppable over the next several decades. She was also territorial. The artiste, who managed to overtake all other musicians in success and stature, surprisingly said: “I can never listen to my songs,” and explained, “If at all I listen to them, I feel I could have done so much better, applied my creative mind, given it a higher rendition.” It is hard to imagine that a musician of her calibre is so self-critical of her work, quite contrary to the narcissism she is often accused of. “I can occasionally listen to my Meera bhajans and Dhyaneshwari. But beyond that…,” her laughter trails off.

This could well be the main reason why Lata is able to invest so much of herself into each song she sings, as if it were her first one. For her, every song has to be better than the previous. In yet another context, she had said, “Music is my life. I have nothing else. Even today — after all these years — I am scared that the composer will be unhappy with my rendition. When I start singing, the world disappears.” Once, when Lata was leaving for a recording, she found two income tax officials waiting in her drawing room. It was a tax complication and they had to take away her cars. “Will you allow me to be dropped at the studio?” she asked, before signing the papers and leaving for the recording. Through the day, not even for a minute did this issue cross her mind, she said. 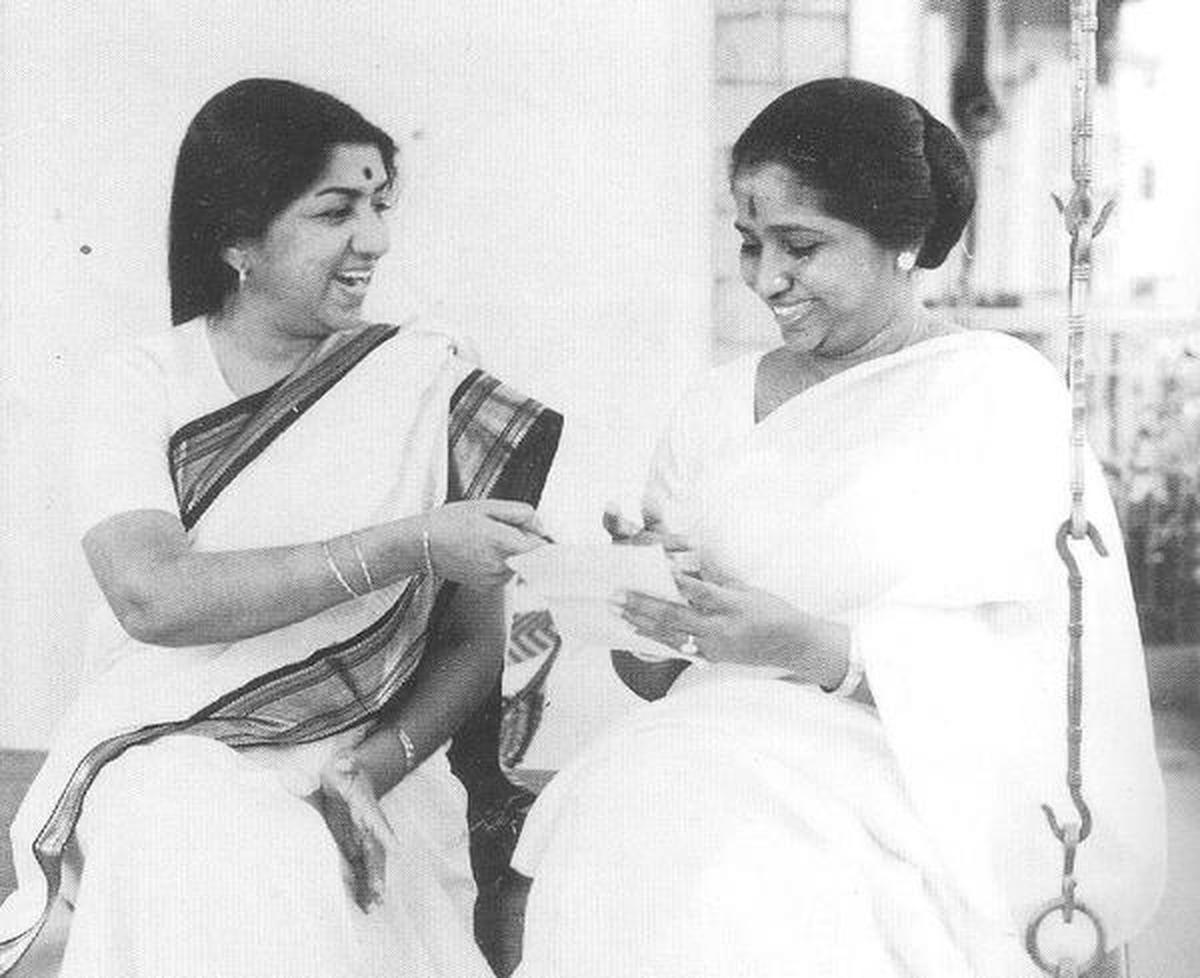 “It is true that as a family we stopped talking to Asha after her first marriage. My mother did not approve of it,” Lata said, but insisted that it never translated into personal jealousy, as the world made it out to be. “We both were in the same profession and there could well be minor differences. But people tried to ignite fights between us. Thankfully, we always sorted things out in our own way.”

“Asha is the more versatile singer,” Lata had declared during her 80th birthday celebrations. While it is true that Asha has flamboyance and charm, it is equally true that listening to duets such as ‘Kar gaya mujh pe jadoo’ from the film, Basant Bahar (1956), ‘Aha le gayi’ (Jwala, unreleased, 1958), and ‘Man kyoon behka’ from the film, Utsav (1984), it is hardly easy to say who is superior.

In fact, when Lata took to singing due to family compulsions, not many in the industry approved of her silken voice. Shamshad Begum, Noor Jehan, Amirbai Karnataki, Geeta Dutt and others dominated the music scene with their robust singing. Ghulam Haider, who was one of the leading music directors of those times, literally fought for a place for Lata in an industry that had spurned her. Lata acknowledges him as her godfather, without whose support and tireless efforts, she would not have achieved what she did.

“It was difficult. My carefree days came to an abrupt end,” Lata recalled in a television interview. She was a naughty young girl, always on the streets playing and stealing fruits from the neighbour’s garden, if she was not absorbing the music lessons her father, Pt. Dinanath Mangeshkar, was teaching his students. “I used to sit on the kitchen shelf, continuously singing as my mother cooked. My mother would be irritated and often say, ‘can’t you shut up?!’ With her father’s sudden demise, she had to wear the mantle of breadwinner. “I was ready to sing, act… so that I could provide for the family. The studio was far from the Malad station. Everyone else heading there took a tonga, but I used to walk. I would save the money to buy vegetables on my way back. During lunch break, people went to the canteen to eat or have a cup of chai, but never me. I would starve the whole day so that there was money to run the family.”

The story of Lata Mangeshkar, like that of Carnatic doyenne M.S. Subbulakshmi, is at once the story of personal victories and also of how women changed the course of performing history. There were other extraordinary women who had, through their extraordinary artistry, compelled the male-dominated world of art to take notice of them. But it was these two women, from pre-Independent India, who steered the nation with their voices. One doesn’t know where to begin to discuss them, which in itself is testimony to the large body of work they have created. The true worth of an artiste like Lata is to be measured by her contribution to Indian history and the evolution of the genre of film music.

The Bengaluru-based journalist writes on art and culture.