Tom Hanks vs. the universe: On ‘Finch’ and more

In an interview with ‘The Hindu,’ the Hollywood icon talks about his one-man performance in the upcoming Apple TV+ film, working with director Miguel Sapochnik, and creating emotion through art

Tom Hanks is in a room, surrounded by shelves with several tagged boxes all around him. The boxes are of different colours and sizes and contain the actor’s most prized possessions: typewriters from all over the world.

Indeed, it is an indulgence — his hobby, even — that began when he was just a teen, and now his collection of them is in the hundreds; from vintage Smith-Corona Sterling to gorgeous Olivetti Lettera 22s. I know this, as a fan of his short story collection Uncommon Type, the actor’s first work of fiction, which contains 17 stories all linked by one thing: in each of them, a typewriter plays an important role.

Tom is delighted to hear this; but he’s not here to promote his novel or his hobby though, the Hollywood icon is eager to talk about his next project for Apple.

After two Oscars, seven Emmys and a host of other international accolades — the most recent of which includes the Golden Globe Cecil B. DeMille Award — it is tempting to wonder what could challenge him anymore.

The answer is, quite possibly, only himself and his imagination. That is literally what he’s up against in Finch; Tom is the only actor (well, almost) in the entire project.

He plays a robotics engineer, one of the few survivors of a solar event that has left the world a wasteland. Finch lives with his dog, but then decides to create Jeff — a robot that is constantly learning about human life — to take care of his dog, after his death. And together, the trio embarks on a dangerous journey into the desolate American West.

The actor admits that the complexity of the role immediately piqued his interest. “He’s in a precarious position right from the get-go, and there’s all sorts of questions for the audience. His daily struggle is one between life and death, survival and loss. When I was first reading it, I thought okay, there’s a familiar science-fiction sort of trope, but it’s going to be a new version of it.” 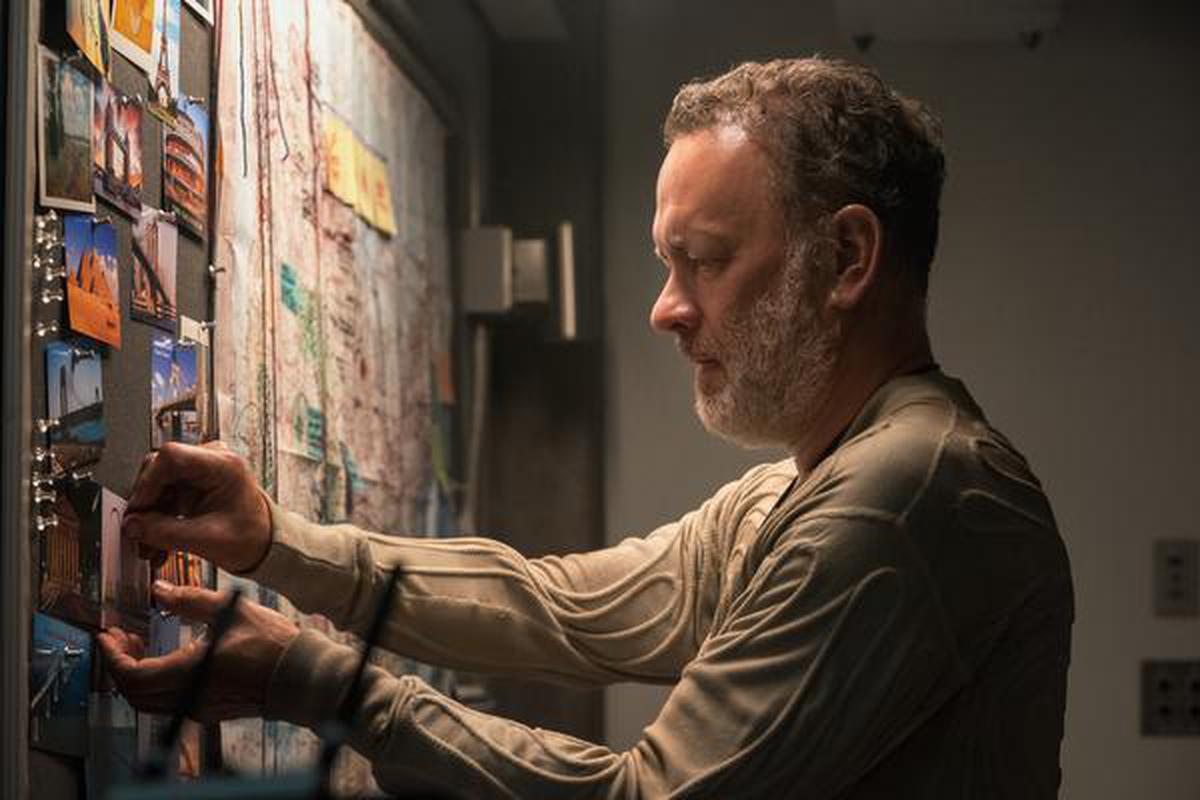 In ‘Finch,’ the actor plays a robotics engineer, one of the few survivors of a solar event

“Then as soon as the dog comes along, it becomes a different film, and I began to think of it as a guy who’s worried about his dog — never mind everything else — the dog is the great love of his life. So speaking as a very selfish actor… it’s just a fabulous part.”

The film’s director is Miguel Sapochnik, renowned for his work on shows like Game of Thrones and House, and is also one of the showrunners for House of the Dragon. His attention to detail in the collaboration was fascinating and “ridiculous fun,” adds Tom.

What would Tom do with a real-life Jeff the robot?

“Each movie comes along, and the challenges are unique every time. There is a type of communication that goes on in a screenplay that is always verbal. But Finch is almost like a silent film, so it was a tantalising prospect. The task was, how do we communicate everything that needs to be said, when it’s just me on screen? And then, me and a dog? There’s nobody else to talk to, and no other actor to engage with.”

“Miguel and I had to figure it out, and honestly, it was a blast. If you’ve ever seen a one-man show on Broadway, you know what I’m talking about. The camera moves around a lot, and does an awful lot of the storytelling. But I still had to discern what Finch’s behaviour and procedure was like. Miguel was very specific, and he had a great sense of the fidelity of these moments. Especially for the first 20 minutes or so of this film, outside of talking with the dog, everything has to be communicated by a shrug or a look, pacing and timing. That was quite delicious to come up with.”

He adds that some of his best memories from the film came from his equation with Seamus the dog, “Seamus and I spent so much time together in the same room or RV, that after a point, he got super-comfortable with me. There are even photographs of the two of us grabbing a quick snooze in the back on the bed, laying next to each other!”

Tom is no stranger to huge emotional moments in his films; from Forrest Gump to the Toy Story franchise, he’s made generations of people — of all ages — cry like babies. In his latest entry though, the emotional arc comes from Finch’s friendship with the dog Goodyear and Jeff, and it is much more powerful than he anticipated. “The connection between the three of them ends up being a really solid equilateral triangle, as opposed to a master-servant kind of relationship. The creation of the robot Jeff is mechanical, technical, logical… but also emotional. Any time you can imbue a creation with something that reflects our own emotions, you are dealing with some sort of creative endeavour… and we can dare to call it art.” Tom Hanks’ co-stars in the film are Seamus the dog, and a robot

“Caleb Landry Jones, who was the incredible actor behind Jeff, was coming up with brand new stuff, improvisation here and there, to create some truly surprising human moments and manifest the emotional beats of what the story is. Yes, we are taking a story that is science-fiction and fantasy on one hand, but on the other, it is a real connection between two sentient beings. Isn’t that what art is; it’s meant to connect us all somehow?” Tom smiles.

Did he feel like he had anything in common with Finch at all? “Well, I certainly don’t have any of his smarts! (laughs) I do have the gray hair and tired bones, but that’s about it. The man himself is much more linear than I am; he’s a guy that is able to weigh what his needs are, methodically slowly live up to them, and acquire everything they want, without the aid of good luck or serendipity.”

“I have far too much ADHD in order to operate like that. This is one of the reasons I was so selfishly attracted to the role; the great thing about being an actor is oftentimes I get to play somebody cooler, more intelligent, hardworking, and more a student of the big picture than I am,” he quips, lightly.

From Cast Away to Finch, 21 years on

The premise of Finch does remind one of Tom’s iconic role of Chuck Noland from Cast Away, the survival drama that released 21 years ago.

“Well, yes, and no. Part of it is because the countenance is much the same, and there you could probably take an aspect of the story element. The difference — something Miguel and I talked about ad infinitum — is that Finch begins with the desire to create the next version of what life is going to be.”

“Whereas in Cast Away, it was about the discovery of what was needed in order to live a full life…and that was company, and getting off that island. So that desire, and the emotional, philosophical super-structure of Finch is very different from Chuck, because there is no attempted rescue,” Tom explains.

Next up, the 65-year-old has two hotly-anticipated projects: Disney’s live-action animated film Pinocchio, as well as Baz Luhrmann’s Elvis biopic. After being the only actor on set in Finch, he does admit he is looking forward to acting with an ensemble cast.

“I would like my next character to be part of an ongoing ensemble, in which there are 18 people in the room at the same time, and we all get to talk and listen to one another. The discipline and pleasure of interacting with other people in a big movie is a lot easier since you are playing off of their characters; emotions and story beats. It is an easier way to stay sane too!”