Actress Kim Sharma recently made her relationship official with her beau Leander Paes on social media. The duo has been shelling out major couple goals since then. On Saturday night, Kim took to Instagram and shared a mushy picture with him.

They can be seen looking at each other and flashing their million-dollar smiles. Kim and Leander can also be seen holding their hands and it is all things love. She took to her Instagram story to share the picture. She put an awestruck emoji along with it. Have a look: 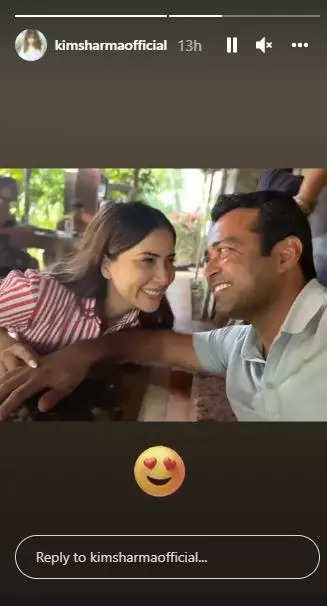 Kim also dropped a solo picture of Leander where he can be seen smiling his heart out for the camera. Along with the picture, she wrote, “Snack”. Have a look:

Meanwhile, the duo recently extended Diwali wishes to their fans in their traditional avatars. They dropped a sweet picture that also featured their dog. Sharing the picture on her handle, Kim wrote, “Happy Diwali from us to you. I hope you’re happy healthy always. Love and light

Kim and Leander had made their relationship official by sharing the same picture on their respective handles. Leander had written, “Magic” while sharing it on his Instagram handle.

The actress has stayed away from the limelight. But fans still remember seeing her in ‘Mohabbatein’ with Jimmy Sheirgill.